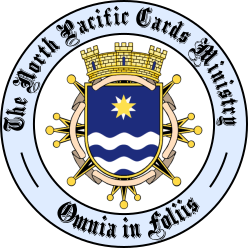 ​
Never once had I ever expected for me to be assigned the role of leading the organization that manages TNP's card programs. Previously this was known to be the Cards Guild, and while that organization still exists, our Delegate chose to enlarge its presence to its own, fully-functioning ministry.

Being assigned this monumental task has not been simple. Barring real-life obligations (particularly all the drama 2020 has been experiencing), the Guild was assigned the task of making a full transition to become the Ministry of Cards as it is known today. Naturally this was achieved rather quickly, and the completion of said transition allowed us to fully devote our time into completing the items set out in our agenda. The current status of how we are coming along with regards to that agenda has been listed below:


1. See to the full introduction of Cards Integration for all regional ministries - The vast majority of what needs to be done has been completed. During the past few months, I reached out to every ministry regarding how they wish to introduce their cards programs. Each minister was more than happy to indicate their interest (or become involved when sufficient developments have been made), and development of how the program(s) will function - once introduced - actually was contributed by not just me or my deputies, but ministers such as @Cretox State as well. Such ministers have been incredibly helpful and the process of completion might have taken a few more days if it weren't for their aid.

The final step to actually completing Cards Integration will require coding a spreadsheet as to record the tasks each ministerial staffer's completed. Unfortunately, I am completely oblivious to coding but one of my deputies possesses enough experience to finish it off in my stead. Should they be successful in coding it, then Cards Integration should be released for all ministries by the end of this term.

2. Oversee the introduction of recruitment methods to draw new members into the Cards Guild - Minister @Nimarya has been very welcoming with regards to introducing telegrams for Home Affairs rows, and they actually came forward to me to discuss implementing Cards Guild + Ministry of Cards telegrams. With the help of r3n and Cretox, these telegrams were drafted and sent out for HA to utilize. For the most part, I believe that this part of the agenda has been met; telegrams were the absolute most important thing we needed to introduce for recruitment.

3. Determine whether cards are truly effective in incentivizing Delegate/Vice Delegate transitions - The Ministry of Cards believed that some closure needed to be obtained regarding whether hastening WA transitions were possible through cards. We studied this by introducing an SC-approved event in which all who endorse the Delegate/Vice Delegate and/or promote the event + transition would win cards. The event was officially introduced on 10/6/2020 and Kranostav achieved in-game Delegate status on 11/3/2020, leading the event to last for an estimated 28 days.

Officially, our original goal was to raise the endorsements for Kranostav's + Dreadton's nations by 25 per week (which would have led the event to ideally end after 28 days), but we later changed that to 30 per week (21-day event duration) after budgetary concerns were raised. As one may tell, the goal for 30 per week was not met; rather, our original push for 4 weeks was achieved instead (though admittedly not through 25 endorsements per week as we wanted it).

Concluding the above information, it can be inferred that cards, while providing a noticeable hastening to WA delegate transitions compared to no cards being used, can not be relied on to make the process as fast as one may like to. As seen above, the event yielded desirable results (at least from my POV), but the results were not so desirable that they would serve as definite proof to argue the effectiveness of cards in transition periods.

4. Facilitate the introduction of a fully-fledged card tag for the entire game - This was (by far) the easiest thing within the agenda. The support for its implementation was already there, and I (for the most part) just steered its introduction in the right direction. It was almost immediately added to the game after I made the post, and now any region can add the "Trading Cards" tag if they so wish.

(Naturally TNP became one of the first to add it as soon as it came out!)
1. See that regular staff members increasingly contribute towards our already-introduced programs - Due to cards now being its own ministry, we have seen an increase in applications for our executive staff. The increase is definitely not exponential, but I took note of how rising stars within TNP (whether it be @Comfed, @Dragonstar5674, @Arichia, et cetera) were among those who applied. Having our staff include even notable users within the region is a definite plus for quality~

For activity itself, I still believe we have a long ways to go on this. Yes we have been informing staffers regarding possible tasks they may work on, but this has been few and far between. Once Cards Integration becomes introduced will I believe that we'll have time to fix this pothole of an issue.

2. Reform our already-introduced programs to encourage more participation - Reformation remains a task which we still have yet to complete. However, this seems to not be a core issue at the moment. The reasons for this are due to the facts that: 1) activity seems to be overall increasing for cards (in general), and 2) reformation will be simultaneous/near-simultaneous with Cards Integration.

For what I exactly mean with the former is that the cards community has been expanding at a steady pace. Most recently, I noticed long-time GPers (such as Numero Capitan) join and become fully-fledged cards traders, and TRR affiliate + former TNP delegate Jamie Anumia helped get the Guild's Card Guide included as part of TRR's newest card program. These point towards a growing interest within cards as a whole, and while this growth does not specifically cater towards TNP's cards community, I have little doubt that we will have a share of the increase in cards traders and therefore sustain in participation for the time being.

For the latter point, Cards Integration is primarily a program that will seek to rewards non-cards ministries for what they've done, but if we don't reward our own Cards Ministry staffers with cards then that would be a highly ironic move on our part. Therefore, we will also aim towards including rewards for Cards staffers within the Cards Integration program. Non-ministerial cards staffers will be prioritized, but all staffers deserve appreciation for their effort.

Overall, this part of the Guild-centered agenda still requires completion, but actually completing it will be very time specific, and its completion does not seem to be an ASAP task either.

3. Encourage a retaining of Guild membership status - This is one of the largest things I believe we must take a greater consideration in reviewing. At the moment, the current membership is at around 76 Guild members, and while we have been receiving new applications every week, many members have lost their membership due to their citizenships expiring. The latter fact is important not only for us but for TNP as a whole, since less citizens means less availability for NationStates users to participate in our region's affairs.

I have been pinging members of the Card Guild regarding their loss in citizenship (and subsequently their loss in Guild membership), but we can do much better than that in my book. This is why we mentioned a scaled rewards system based upon the length of one's Guild membership; we also suspect that this scaled rewards system will be incorporated into the Cards Integration program as part of the Ministry of Cards rewards.

For this part of the agenda, I believe that this is the greatest challenge our Guild is currently facing.

4. See to the introduction of a minigame that will focus on knowledge of cards trading - Cards Trivia has long been discussed even before we mentioned it in our agenda, and naturally a few months after announcing it would give us plenty of time to work on this minigame's implementation. At this point in time, it seems likely to be released; the few remaining issues we must address before it can be released are how we can sustain it and how it can be promoted for activity's sake.

(Also, though it's officially just a minigame, Cards Trivia will offer enough cards information for users to understand the game more or gain a general view of how the Guild works; the latter's probably beneficial for Cards staffers ^^)

5. Work with the Ministry of Radio to create video-based cards guides - The staffer who is currently working closely with the Ministry of Radio on this is @Praetor. I personally do not know the full extent of how it's going, but if anyone is able to get this job done it's Prae. The Ministry of Cards is fully willing to help them or Radio when needed, and we understand that the video-based card guides may take a longer time to accomplish than most of the other tasks we mentioned. We hope to receive more news from these users regarding the guides' progress in the future!
In addition to these, several interesting events outside of the agenda came up, most notably the: 1) opportunity to release a cards-based edition of The Northern Lights as an offer by @BMWSurfer, along with the 2) ability to provide card incentives for events that TNP has been releasing or participating in (the most notable ones being Z-day and the pumpkin carving contest that Culture hosted for Halloween). The former's offer was immediately accepted and is expected for release by early January, while the latter is likely to continue as a trend going forward - as cards are one of the few site-permitted methods to provide a tangible reward to players.

Concluding everything above, there are many things that we are still working on, yet simultaneously many things seem to have been addressed during this surprisingly unusual year. The support has been amazing, and for a person like me - someone who never expected to become an official within the largest GCR in the game - what I most strongly hope is that this fledgling ministry has been making do on its commitment to serving everyone here, through cards, in a manner which everyone can appreciate and even venerate.

Thank You All for Reading (and thanks to deputies @r3naissanc3r, @Praetor, @Noah's Second Country, @9003, and @Rom for everything you've done up to this point),