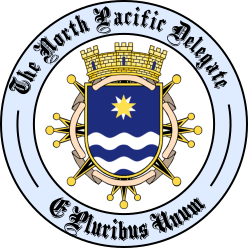 I am pleased to announce that I have published a new Directive that will cover the rules and regulations of the North Pacific Army. These rules do not replace any requirements listed in the legal code, the constitution or the bill of rights, but do establish the standards that I expect the North Pacific Army to operate under during my administration. More importantly, these rules replace the previous NPA Code of Governance. The NPA Code was an outdated document that did not serve the needs of The North Pacific Army of today and it was well overdue that it be replaced.

The new rules of the North Pacific Army are available here.

Furthermore, I will be making a number of changes to NPA High Command. Firstly, I will be formally retiring from my position as a General in The North Pacific Army. Likewise, I have recently spoken with Malphe who has agreed to transition out of their role as an NPA General. In addition, I will also be removing Darcania who is no longer a participant in the North Pacific Army from the NPA High Command. The new rules will also allow future Delegates to make changes to the NPA High Command membership when required. This will assist in keeping the NPA's military leadership active and responsive to the needs of our elected government and to NPA members.

In addition, I will be promoting three individuals to the NPA High Command. All of these individuals have demonstrated considerable leadership qualities as well as operational capabilities throughout their time in The North Pacific Army. I am delighted that they have agreed to step up and assist Minister of Defence Nimarya in her important work leading our regional army. Without further ado, I announce that @BMWSurfer, @Robespierre and @Rom have been promoted to General [GEN] and to NPA High Command.

I believe these changes are necessary and represent a positive step in the continuous improvement and growth of our regional army that we are all so proud of. Please join me in congratulating General BMW Surfer, General Robespierre and General Rom on their promotions. We wish them all the very best in their new leadership positions.

-
-
-
You mean I have to share the Command HQ with three more nerds!? I mean, congratulations to our new Generals!

-
Nooooo, not my comfy armchair... I mean, congrats, you three! Been a long time coming.

-
-
-
I'd like to thank Delegate McMasterdonia for providing me with this opportunity to serve the North Pacific Army, and, to a greater extent, the region, in an increased capacity as a member of the High Command. For believing in my leadership capabilities and for helping set the NPA back on track in recent times, I appreciate the level of trust that I have been given.

Likewise, I congratulate my fellow Generals on their promotions to the High Command as they will serve alongside me. All very well deserved and some overdue. I look forward to working with the rest of the Generals Staff

Bobberino:
Nooooo, not my comfy armchair... I mean, congrats, you three! Been a long time coming.
Click to expand...

You've been promoted to Malphe's armchair...oh no, the rat has been biting on it...

-
Seeing as I never resigned from the NPA, what rank am I now? (I missed the little blurb dismissing me from HC when this was first announced)

-
There are two ways you can read this, IMO. Either you are a General, but do not have HC perms; or if you are not a General and this would be a de facto demotion, the next rank down (and the one I promoted you from, a little over two years ago today) is Colonel.

-
With all due respect, I'd prefer an answer from either the Minister of Defence or the Delegate on this.

-
I'd also like to note that I take issue with the assertion that I'm "no longer a participant in the North Pacific Army".

I am both currently a member of the North Pacific Army and as recently as 9003's term took part in piles and actively gave advice to the Ministry of Defense. It was only during this term that I stopped giving advice (due to the current Minister actively ignoring or dismissing all advice I had attempted to give), and there have been all of zero pile operations during this term for me to participate in.
(Also I still run the bot y'all use.)
Last edited: Mar 31, 2021

-
-
-
-
-
You are dropped back down to the highest officer rank following removal from NPA High Command. Unless it relates to a retirement as well.

The earlier mentioned changes in this thread are designed to make sure the High Command is able to change more readily to suit operational needs. With the recent changes, we’ve seen a much more involved high command this term.
You must log in or register to reply here.
Share:
Share
Top