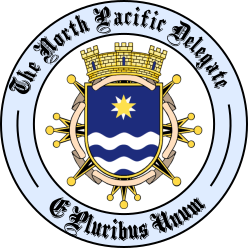 I’d like to thank all of you who participated in this election, by voting and asking questions, you have helped to keep our democracy strong. As we all know, decisions are made by those who show up, so thank you.

There are a number of appointments I now need to make. Turning firstly to the Executive Council.

I appoint the following to my Executive Council and I invite them to take their oaths accordingly.

I thank all appointees for their willingness to serve. I look forward to working closely with them in delivering upon my platform for all TNPers.

Staffing and Other Positions

Ghost (Pallaith) will be reappointed in his position as Chief of Staff. @Rom will serve as my Press Secretary.

Praetor (Praeceps) is reappointed as the Guildmaster of The Cards Guild and Marcus Antonius (Ethnon) will continue to serve as Chancellor of The North Pacific University.

That is all from me, for now. I will now take questions.

-
-
-
Congratulations to all those appointed! Thank you McM and congratulations on your election as our WA Delegate. I can't wait to see what you have in store for us this term!

Deputy Speaker
-
-
-
Best of luck to those appointed, and congratulations! This is shaping up to be an exciting term.

-
Best of luck to the appointed! And once again, congratulations McM!

-
-
-
Congratulations on your re-election as Delegate of the North Pacific, McM! You’ve put together a very outstanding lineup of Ministers to serve on the Executive Council this term and I’m sure the new Ministers who weren’t aboard last time will do a most excellent job during their tenures. It’s good to see the Ministry of Defense in such good hands, and it’s good to see Marcus getting another chance at being a full-fledged Minister. All appointments are well deserved, congratulations everyone!

Usurper of the title of Legal Nerd

-
-
-
Congratulations, and best of luck to the newly elected government!

Deputy Speaker
-
-
Fake news TNL said he wouldn't, no, couldn't be reelected, but here he stands. We have faith in you Mr. Delegate, Keep TNP Great.
Last edited: Jan 13, 2020

One cat to rule them all

-
-
Congratulations and best of luck to those appointed! I look forward to another great term @mcmasterdonia

-
-
-
-
Congrats to all. We are lucky to have all of you talented individuals working for TNP!

the #2 Fan in the World of Ivanka Trump

-
-
-
-
@TlomzKrano forgot to take his oath! So I hereby appoint Tlomz as Minister of Foreign Affairs.

congratulations on the win
Last edited: Feb 8, 2020
You must log in or register to reply here.
Top