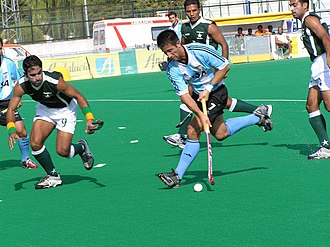 Field hockey is a widely played team sport of the hockey family. The game can be played on grass, watered turf, artificial turf or synthetic field, as well as an indoor boarded surface. Each team plays with ten field players and a goalkeeper. Players commonly use sticks made out of wood, carbon fibre, fibreglass or a combination of carbon fibre and fibreglass in different quantities (with the higher carbon fibre stick being more expensive and less likely to break) to hit a round, hard, plastic hockey ball. The length of the hockey stick is based on the player's individual height: the top of the stick usually comes to the players hip, and taller players typically have taller sticks. The sticks have a round side and a flat side only the flat face of the stick is allowed to be used; if the other side is used it results in a foul. Goalies often have a different kind of stick; however, they can also use an ordinary field hockey stick. The specific goal-keeping sticks have another curve at the end of the stick, this is to give them more surface area to save the ball. The uniform consists of shin guards, shoes, shorts or a skirt, a mouthguard and a jersey. Today, the game is played globally, mainly in parts of Western Europe, South Asia, Southern Africa, Australia, New Zealand, Argentina, and parts of the United States (primarily New England and the Mid-Atlantic states). Known simply as "hockey" in many territories, the term "field hockey" is used primarily in Canada and the United States where ice hockey is more popular. In Sweden, the term landhockey is used and to some degree also in Norway where it is governed by Norway's Bandy Association.
Last edited: Jun 23, 2020
You must log in or register to reply here.
Top