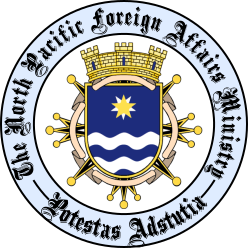 
Below is an update from the Ministry of Foreign Affairs regarding our activities (other than providing general advice to the Delegate.)

We have continued to make sure that our master roster of diplomatic corps members is up to date, and continued to manage to swiftly respond to executive staff applications. I thank the deputy ministers, particularly @Sanjurika for doing this.


After the roll call, we have managed to have a full complement of ambassadors, with all regions now being covered by an ambassador. These ambassadors should by now have joined their respective platforms and introduced themselves to their new regions.

There has been two new embassy requests. One of these being the Union of Allied States which has been accepted, we look forward to working with them. The second request was by Montrandecs Neighbours which was rejected, but we have discussed our reservations regarding the region with their representative who understands why the decision was made. In addition, we have not closed any embassies this month.

We have overseen the distribution of TNS and ‘The Epic Gamer Party invites’.


Deputy Minister Sankurika oversaw the creation of the codes for these releases - for that I am grateful. @mcmasterdonia has also been working with us and Communications to find ways to make it easier to code these issues for the respective forum types.


In the next week, I will be moving forward with the first draft of the World Factbook. More details will be published soon. As well as this, deputy ministers @Praetor and @Brendog have been working on individual tasks focussing on the development of a training manual and an updated version of the Diplomatic Protocol. This will be a continuing theme throughout the term, with my aims for this to be finished by the end of the term.


In conclusion, I am content with the work we have completed so far this term. There is a lot more for us to do, and I am hopeful that we will achieve a lot more in the next few months

Usurper of the title of Legal Nerd

-
-
-
In Owen we trust!
You must log in or register to reply here.
Top