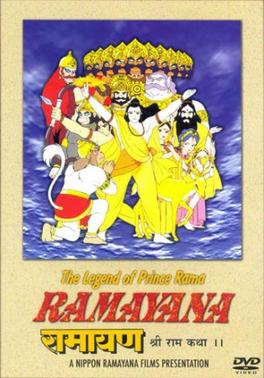 For the first post in Narnia's blog of weird, obscure cartoons we will talk about the 1992 film called Ramayana: The Legend of Prince Rama. The film was produced in Japan however the story and most of the voice actors are from India. The film is definitely obscure. DvDs of it are no longer produced and I was only able to find a few copies selling online at a rather high price. Fortunately a full upload was available on Youtube. From the looks of it the film is essentially abandonware. I hope to find an English physical copy so I can view the film later in a higher resolution than 480p.

The film stars the rather pale protagonist Rama. Rama was going to be the prince of his kingdom, however the Queen was reminded that the king had promised to fulfill two promises to her in the years past. She demanded that her own son be made King and that Rama be banished for 14 years. The king, being kind of an idiot agrees. Rama actually agrees to this despite having the full support of the people and pretty much everybody else. I couldn't help but think that he could have just overthrown the government if he wanted. Rama's biggest personality trait in the film is that he values his honor and keeping his word above all common sense. 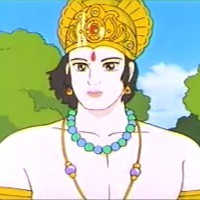 I guess since the film is set in the olden days that sort of old fashioned honor was looked upon more highly but to a crooked thug like Narnia it makes him look like kind of a fool. Still, he's a likable character despite his outdated values. A bit later on in the film the king dies and the Queen's son, Bharata comes back to the kingdom. I assumed he was going to be the bad guy in the movie but he actually turns out to be a nice guy. When he discovers the Queen's plot he tries to get Rama to come back, but Rama with his uh, interesting personal values doesn't want to disobey his father's last wishes of banishing him from the country.

Seriously, he could have saved himself so much trouble if he didn't act like a robot that couldn't disobey a command. This would be my main criticism of the character, but alas their would not be a movie if he didn't act that way. Rama decides to instead stay in the woods with his wife, Sita and his younger brother Lakshmana.

The film really gets started when the daughter of the demon king, Ravana visits Rama and his wife Sita disguised as a beautiful maiden. When she sees Sita he turns back into her demon form and Lakshmana cuts her nose off by whipping a knife at her face. Ravana is understandably pretty upset that someone cut off his daughter's nose and comes to kidnap Sita. Using magical trickery he's able to capture Sita and bring her back to his kingdom called Lanka. I assume this is related to the real life nation of Sri Lanka. 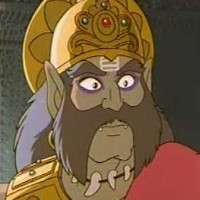 Rama and Lakshmana head out on a quest to free Sita. The first real action scene in the film is when Rama fights a big slime monster thing. After a brief battle they kill the monster and a ghost emerges that is grateful to be allowed to go to heaven. As a reward it tells Rama that someone called Sugriva. Soon after they meet a monkey-man named Hanuman that turns out to be one of Sugriva's (also a monkey) followers.

Hanuman is actually my favorite character in the film. He's a very helpful and likable character. Later on in the film he really steals the show when we find out he has superpowers. Hanuman can fly like Superman, turn giant or tiny like Ant-Man, lift extremely heavy objects and fight with excellent skill. He's basically a superhero worthy of any Marvel movie.

Sugriva is revealed to be a king and agrees to help Rama find Sita. They send out search parties and the one with Hanuman is the one which eventually finds out where Sita is. This is where we find out of Hanuman's superpowers. Turns out he was placed under a spell to control his abilities but they unlock his abilities to let him fly to Lanka. He turns tiny and flies through the air like a fly. He's basically a better version of Ant-Man (sorry Ant-Man) since he can turn small and fly.

He actually finds Sita, but she in a bit of sudden stupidity decides to not leave because of the many others kept enslaved in Lanka. Hanuman could have just Supermanned her outta there and came back later, but she refused to leave. Maybe she jut didn't trust some weird monkey guy or something.

After Hanuman returns the group hits a roadblock over how to cross to Lanka. Usually this would be glossed over by most films but in this movie Rama has to pray to a "Sea God" that can control the fish and make rocks float on top of the sea instead of sink. While normally I would not approve of praying to pagan supernatural entities, for this time it was for a good reason and besides you can't argue with results. It was cute watching the monkey army build the bridge over the water and they even had cute forest animals join in the construction. It was a nice little scene before the battle. One interesting thing to note is that the film has an intermission. At first I thought it ended on a cliffhanger.

The battle was surprisingly awesome. I was expecting a little skirmish but it actually felt like a real war worthy of a big budget fantasy film. Ravana takes loss after loss while the heroes, especially Hanuman really rip shit up. Ravana is even forced to awaken a giant named Kumbhakarna to fight Rama's forces. Kumbhakarna actually beats Hanuman, throwing him into the cities stone wall, which was actually a pretty dumb move on his part since it ripped a gaping hole in the cities defenses. Rama proves himself as a hero though as he engages the much larger Kumbhakarna and defeats him with a stab to the heart.

I actually felt that this movie did a great job with the villains. For example Kumbhakarna and even Ravana were shown to be sympathetic. Kumbhakarna mourned his sons that were lost in the battle and Ravana was surprisingly more like a normal person in a bad situation than a cartoonishly evil tyrant. I was expecting him to be a pseudo-Fascist type like you'd see in most movies.

After Kumbhakarna is killed Rama tends to the wounded soldiers but Ravana's son, Indrajit shows up in a flying chariot with Sita. Indrajit is the most evil character in the film and pretty much manipulated Ravana into escalating the conflict. Earlier in the film he persuaded Ravana to not let Sita go and after every defeat he urged his father to send out more and more elite troops instead of suing for peace.

Indrajit seemingly kills Sita with a sword and shoots Lakshmana with an arrow. This scene was actually pretty violent for a cartoon. It showed blood and people getting stabbed and shot. I don't think this film ever got an official MPAA but I'd rate it as PG-13. The violence isn't gratuitous but it might scare younger viewers. When Sita was stabbed I was actually pretty shocked. I thought for a moment that Rama just failed his mission but fortunately we learn that Indrajit is like a wizard that can use illusions and that Sita is still alive.

The group fights Indrajit in a cave that is the source of his powers and kills him later in an aerial battle that was actually pretty intense. Indrajit tried to escape on a flying chariot but Rama followed him on a flying bat thing and Indrajit actually committed suicide when he lost instead of letting Rama arrest him. Hanuman goes on a quest to bring back a magical mountain that could heal Lakshmana and gets back just in time. He just lifts the whole thing up and brings it to Lanka, which was pretty impressive.

Ravana finally comes into the fight on a flying chariot that's basically a fighter jet. It even shot a "missile" that exploded like a tactical nuke...those poor monkeys! With the help of Hanuman, Rama manages to take back the rather technologically (magically?) advanced machine down.

The film ends with a one vs one fight with Ravana and Rama. For a second it seemed rather anticlimactic with Rama just chopping off Ravana's head but Ravana had the power to regrow his severed head which made the fight quite a bit more interesting. It was actually pretty violent since it showed decapitation, even the gross part where the bone and guts are exposed. I thought they missed the opportunity for a great one-liner "You should have quit while you were ahead." It would have been funny. Rama wins the fight by saying a prayer to Jesus and gets a golden disk that he uses to destroy Ravana. With Ravana dead the war is over and they all live happily ever after. A friendly ruler even comes to power in Lanka, so they didn't even forget about making things better for the bad guys.

I thought the movie was awesome. The animation looked good and made me want to see an HD version. The characters were memorable and likable, the story was surprisingly complex but never hard to follow. The film is a real hidden gem. If you ever get the chance to watch it I would highly recommend it. I give it a 10/10.
You must log in or register to reply here.
Top