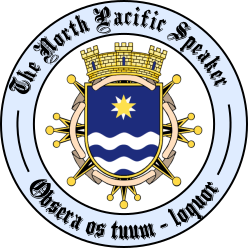 Welcome to The North Pacific. We highly recommend you apply for Citizenship. Citizens can:
Step 1: Meet the requirements
Citizenship does not require WA membership, but you must meet the following requirements:
Step 2: Take the oath
Fill in and post the following application:

You can view the criminal code you are promising to obey HERE.

Step 3: Participate in the region
Most of the time, your application will be approved within a few days. When this happens, you will be placed in a usergroup that allows you to post in forums set aside for the Regional Assembly. You are allowed to vote in any voting thread that begins AFTER you are admitted. Please note that to stay a Citizen, you must post in the forum every so often and maintain a nation in The North Pacific. For more details on these citizenship requirements, ask the Speaker or consult the Legal Code (chapter 6).


Step 4: Update your citizenship record as necessary
You must post in this thread if:
If you have any questions, ask the Speaker or their designated deputy. They will be more than happy to help you get started.

Enjoy your time in The North Pacific!

Try to keep all off-topic posts out of this topic. It will help streamline the process.

UPDATE (as at March 24, 2022):
Following the passing of the Citizenship Reform Act, an applicant may now appeal to the Speaker to overturn the rejection of a citizenship application. Appeals will only be entertained if all the following conditions are met:
Should you wish to make an appeal, you will post your appeal in this thread. If you do not have post permissions in the thread, please apply for residency status here. Please also note that residents who obtain your citizenship via such an appeal will need to maintain World Assembly status on your citizenship nation.

For reference, quoted below are the sections of the Legal Code relating to citizenship applications and when citizenship is lost.

Legal Code:
Section 6.1: Citizenship Applications
2. Any resident may apply for citizenship using their regional forum account, by providing the name of their nation in The North Pacific, and swearing an oath as follows:

[I Alkatraz leader of 'The Empire of Bangladesh']

Former English Colony:
They are using a mobile phone for access, so they need to login from a wired IP address.
Click to expand...

@Vincone Cae your application failed an Admin check due to you using a mobile phone to post your oath. Please post an oath from a wired IP address.
D

A reminder to all members wishing to apply for citizenship, please fill out the official oath in this format.

@Davorinjo is granted citizenship conditional upon passage of security checks by the Vice-Delegate and the Administration.

@Bombeiro is granted citizenship conditional upon passage of security checks by the Vice-Delegate and Administration.
O

Do I have Citizenship yet

@Owen The Administration must first do their checks.
Last edited: Jan 2, 2019

@Owen citizen
@yuhim - checks fine
@Bombeiro - checks fine
@Davorinjo appears to have 2 accounts currently, will message
@lpap66 - using their wireless phone, need to used a wired IP address
@Alkataz - is logging in from what I think is a work location

@Pigguy49 and @Jimi19 please use the current version of the citizenship oath that has the force of law.

Due to ongoing elections in this region and with recent results in Cromwell, the Nation of Cromwell hereby renounces its citizenship and thanks the fine people of TNP for their time.

(OOC - I tried to play along but just too hard to keep up with and most people don’t seem interested in casual RP. All the best.)

@Davorinjo -to clarify, they also appear to be on wireless, so clearing up the 2 accounts won't automatically clear them. They'll need to repost.

@Jacob is granted citizenship conditional upon passage of security checks by Administration.

Wonderess:
@Pigguy49 and @Jimi19 please use the current version of the citizenship oath that has the force of law.
Click to expand...

Artemis:
@Jacob is granted citizenship conditional upon passage of security checks by Administration.
Click to expand...

@Crown Isles please use the current form of the citizenship oath. Your version is similar but not exact.

Pigguy49 does not pass admin checks. Looks like a business IP